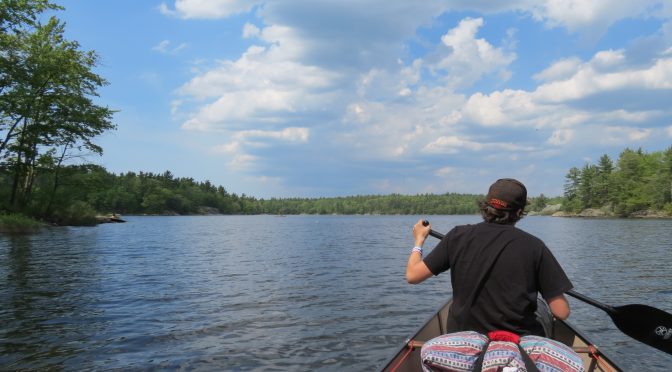 I have been to McCrae Lake Conservation reserve several times previous to this trip, but when I went there this Victoria Day weekend (May 18-21, 2012), it was one of the nicest. My friend and I had planned this 4 day trip throughout the winter months to go on the May 2/4 weekend, and was well worth the wait.

Lake McCrae is a very easily accessible weekend canoeing getaway. Located just off highway 400 at Georgian Bay Rd, there is a small parking lot where you can park your vehicle for the weekend at no charge because it is all crown land. The put-in is a 200 m portage from the parking lot into McDonald Lake from where you would portage into McCrae Lake. It is possible to enter Georgian Bay from McCrae quite easily, just over a lift over, and from there continues a route up the Musquash Channel into Three Rock Chute where there are campsites on crown land as well as McCrae and McDonald.

Day 1 – Arrival (Friday) When we went up on the Friday to beat the crowd there was only two portages, so we had lots of time to set up camp that day. The first 200m portage from the parking lot and the 250m portage from McDonald into McCrae. The route was very direct because it was the May 2/4 weekend so we hurried to grab a campsite and paddled quickly to beat some kayakers’ headed in the same direction as us. I knew where a great campsite was so we paddled straight to it, although it was not busy this day because the weekend hadn’t officially started yet. The campsite consisted of a very nice view of the southern region of McCrae facing northwest. Once I pumped the water had lunch, we set up camp and explored and got some firewood. It turned out to be a very nice day and by dinner we had a perfect fire and I cooked steaks over the fire and attempted to bake some potatoes while messing up the stuffing. The campsite is the best for sunsets because it faces west so it makes for great evenings. This night was nice like all the nights were.

Day 2 – Staying Put (Saturday) Today is the day that everybody arrived to McCrae. Originally our plans were to head northwest up the Musquash Channel in Georgian Bay but we decided to stay put because of the amount of people arriving to camp in the reserve, so we wouldn’t loose our campsite. We did not do any canoeing today, I went out on my own for a bit in the morning but that was it. We explored the surrounding area near our campsite where there were high rocks and some cliffs which were interesting while we gathered firewood for the night. It got very hot this day around 30 degrees celsius which was great for swimming. Although its only May, the water was a nice escape from the heat. Once again it was another very nice evening and night. Throughout the whole trip we never heard any animals at night but that didn’t stop me from hanging the barrel. There was a conveniently placed overhanging tree by the site that worked out perfectly for hanging the food barrel. For dinner tonight we had Hamburger Helper mix with hamburger that I had dehydrated a month before which turned out great. At night the lake was so busy you could see tonnes of dots of light from fires across the lake. As well as chain reactions of people screaming woo-hoo and then others following in. Other than that it was pretty quiet for the most part where our campsite was situated.

Day 3 – Day Trip (Sunday) Today we did some exploration in the canoe. We left most of our gear at camp and took the canoe for a tour up the western part of McCrae and took the 60 m lift-over into Georgian bay. We didn’t go too far into Georgian bay but enough to ride the waves of some motorboats from the surrounding cottages. We headed into a section of the Musquash Channel around 3 rocks and headed back. When we where back into McCrae we realized just how many people were camping on the lake. It looked like every single campsite was occupied as well as some bush camps people had made. It was considerably noisier in the central part of McCrae north of the island. People playing music, swimming etc. We took the long route back to our campsite and went north of the island as I passed the campsite I was at during my short solo trip a few weeks before. When we got back to the campsite we had lunch, pumped some more water, went swimming and got firewood. Saw a family of geese going by, and later there had been a fish hanging around a rock all weekend and there was a fishing line hanging in a tree that someone had left, plus I happened to bring along a lure, so I made a fishing rod out of a stick with the fishing line and lure I had. I actually almost caught the fish 2 or three times but after a good hour or two the stick fishing rod didn’t seem to work. We ended up having lemon pasta for dinner that was not too bad but next time i’m planning on remembering my fishing rod. That night we had Bannok over the fire which was great. A few people around the lake set up fireworks and you could hear the wealthy cottagers in Georgian Bay with the huge banging fireworks too.

Day 4 – Leaving (Monday) We left McCrae lake today with no food to spare. It was a very enjoyable trip with the temperature reaching +35 degrees on day 3. Since McCrae Lake is so close to where I live it did not matter when we left, so we left later in the day after most of the people had left. We exited the same way we came in for the most part. We decided to attempt to paddle through a marsh area and eventually got stuck, which was fun. The trip home was not too bad considering it was Victoria Day weekend. I hope to get into Long Lake in the Matchedash area for my next weekend trip. Thanks for reading, don’t forget to check out the downloads below as well.